The classic, refreshing taste of Cola-Cola with a hint of sweet vanilla. Case of 12 imported from the USA. 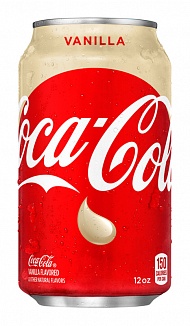 Coca-Cola Vanilla came around upon the discovery that people would often request vanilla shots to be added to their soda fountain Coca-Cola.

There is Coca-Cola Vanilla available in the UK, however the American version and the UK version do differ and many people prefer the taste of the US version.

As well as coming in slightly larger cans, Coca-Cola Vanilla from the USA is made with different sugars and is often considered a sweeter tasting soda.

Order now and get 19 loyalty points